Elsewhere in the world, the number of HIV incidents is either dropping or staying on the same level. The epidemic in EECA is mostly concentrated among key populations – especially, people who inject drugs. Stigma and discrimination towards people living with HIV and key populations remain high in the region.

Tuberculosis (TB) is one of the main health concerns in Eastern Europe and Central Asia. The EECA region has the world’s highest prevalence rates of multi-drug-resistant TB (MDR-TB) and extensively drug-resistant TB (XDR-TB) which do not respond to first line treatment. Besides, tuberculosis is expected to increase significantly in the region if adequate measures are not taken to halt their spread and to treat those already infected. In Eastern Europe and Central Asian countries, labour migrants arriving specially to Russia and Kazakhstan are facing great difficulties in accessing quality health services, including TB services.

TB is estimated to cause more than 40 new cases and 4 deaths every hour in the EECA region. The prevalence of TB in the region and the growing problem of MDR-TB render prevention, treatment and care for it among people living with HIV is extremely important. Even though much work has already been done in this area, it is still very necessary to achieve progress in timely prevention, diagnosis and adequate treatment. AFEW International is working towards improving the quality, range and reach of HIV and TB services and facilitate the co-ordination of HIV/TB activities between vertically separated and isolated healthcare structures.

Hepatitis is an inflammation of the liver, most commonly caused by a viral infection. The five main strains of hepatitis viruses are A, B, C, D and E. Hepatitis B and C affect millions of people in the European region. Two-thirds of infected persons in the region live in Eastern Europe and Central Asia. Hepatitis C is becoming more serious issue in the EECA region. With prevalence as high at 80-90% among people who use drugs, Eastern Europe and Central Asia has some of the highest rates of hepatitis C among people who inject drugs in the world. 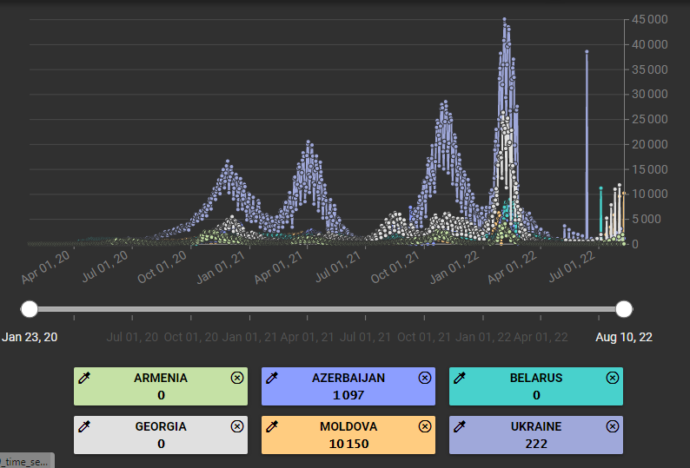 Bi-weekly COVID-19 situation report in the six countries of the Eastern Partnership 11.08.2022