There are currently about a million citizens of the Republic of Kyrgyzstan working in the Russian Federation. Key groups of the population are also migrating to different countries seeking a better life. Because of this, the AFEW partnership conducted a study called “Assessment of Labor Migration Among Drug Users in Kyrgyzstan and Tajikistan”, which ultimately led to the development and implementation of the “Labor Migration: Awareness and Access” project in 2018. This partnership was created in the framework of the “Bridging the Gaps” project and was financed by the Ministry of Foreign Affairs of the Netherlands.

The main objectives of the project were to make people who use drugs more aware of their legal rights, and increase their awareness of organizations that provide social services to Kyrgyz citizens located in the neighbouring countries.

The project was implemented in two Kyrgyz cities- Bishkek and Osh – for 15 months, starting in October 2018. During this period, AFEW-Kyrgyzstan created a database of organizations in Kyrgyzstan and the Russian Federation that provide social support to people from key populations, including migrants. From the number of potential migrants, more than five thousand people who use drugs (PWID) received advice on planning their trips and were made aware of possible difficulties they could face.

Within the framework of this project, AFEW Kyrgyzstan held a series of meetings with migrants who shared with us their feelings, experiences and thoughts. As practice has shown, the most common problem that labor migrants encounter upon arrival in Russia is registration.

It’s common for migrants to turn to fellow countrymen who can provide documents illegally, but these services often cost a lot of money.

“The employer was a Moscow resident, our former compatriot, he did both registration and documents for us. I had registration, but we lived on the territory of the houses that served. It was a basement and there was a room in which we slept. I tried not to go further than this territory – it was dangerous” – Sergey, 36 years old.

Another problem often encountered by migrants from Kyrgyzstan is the attitude of law enforcement officials, who often exceed their authority. Often police detain migrants without any evidence of a violation, simply because there is no one to intervene on behalf of them, and migrants themselves do not have sufficient legal knowledge to defend themselves.

“I remember sitting in a cell for a long time and waiting for a Muscovite acquaintance to come, who might be able to negotiate for me.” – Sergei, 36 years old.

Despite all the difficulties migrants face, they are still going to work abroad due to economic necessity. There are frequent cases where labor migrants fall into slavery. Employers take their documents from them, and then stop paying them correctly, promising that in the future they will definitely give them their salary.

In this way, people worried about their income are often afraid to leave and change their job. They can’t go to the embassy or the migration service, because without documents they will, at best, be sent back home without any money.

Thanks to the project, for the first time, printed information booklets were prepared in Kyrgyzstan in 2019 for people who migrate to Russia to earn money. In these booklets potential migrants can find answers to important questions, as well as explanations for the most common problems that migrant workers face. The booklets also provide detailed guides to pre-migration procedures, including how to correctly prepare documents, as well as consultations with social workers and additional consultations for people with higher status.

A distinctive feature of the booklets is that all the information provided in them is official and reliable. Any prospective migrant who receives the booklet can travel and avoid most illegal situations by following the recommendations.

“This booklet is very important for us migrants. Migrant workers often travel to Russia, not understanding what they will face. This manual should make people think twice before they cross the border and face all the challenges.” – Victor, 49 years old.

“Migrating is scary. Even if you have friends there or you are traveling with someone. First of all, you don’t know where you will live, you don’t know whether there will actually be work. You do not know who you can trust and where you can get help, or what documents you need to take. The booklet can be considered a little lifeline that you always keep close. Many migrants don’t even think about compulsory health insurance, and in the handout, they immediately warn that it is needed. ”- Victor, 49 years old

In the future, AFEW-Kyrgyzstan will continue to support migrants from socially vulnerable groups and provide them with important information. To this end, the organization plans to conduct a study, “The Experience of Labor Migration Among People Who Use Drugs” to study the experience of labor migration in the Russian Federation over the past 3 years among migrants who use drugs. It will also analyze the socio-legal and medical needs of the selected group while planning and returning from labor migration, and while finding work. 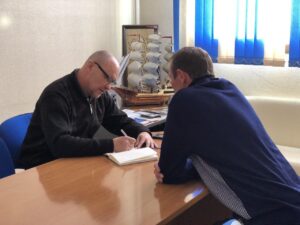 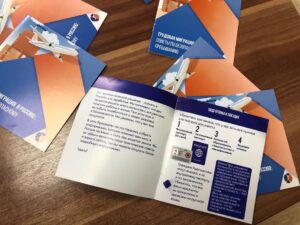