AFEW on AIDS 2018: Cases and Efforts to Spotlight Eastern Europe and Central Asia AFEW International and AFEW Network have organised and supported numerous activities within 22nd International AIDS Conference AIDS 2018. AFEW joined many initiatives by other organisations and networks and presented successful cases of work in Eastern Europe and Central Asia (EECA). Find some highlights below.

Together with EECA regional networks and committed advocates, AFEW has put great effort into making sure that the AIDS crisis and related public health concerns in EECA were featured in the conference program. Each plenary session of the AIDS 2018 had a speaker from the region and lots of sessions addressed the challenges in stopping new HIV and TB cases in the EECA countries. AFEW also supported Russian-speaking delegates to the Conference and helped with translation to and from Russian during AIDS 2018. More than 35 sessions were translated into Russian. A team of 25 dedicated Russian and English-speaking volunteers was recruited, trained and coordinated by AFEW International. These volunteers have provided language support during the conference and at the events organised by AFEW.

AFEW has also contributed with financial and technical support to the EECA networking zone ActivEast which was one of the busiest zones in the Global Village with more than 50 sessions during the conference led by community leaders.

Besides, AFEW International helped Amsterdam Youth Force by providing it with fiscal and administrative support, technical assistance and financial means to bring young volunteers to the conference. 35 young people from different countries of EECA have travelled to Amsterdam by bus from Kyiv and have worked at youth-focused events of the Global Village.

A migrant from Tajikistan came to talk AFEW’s Leadership workshop ‘Migration in Eastern Europe and Central Asia: Access to healthcare for all?’ presented information about migrants in EECA, and labor migrants from Tajikistan in particular. Findings from a needs assessment survey of labour migrants among people who use drugs in Kyrgyzstan and Tajikistan were presented.

A labor migrant from Tajikistan Zebo Alimahmadova came to Amsterdam to tell about her migration experience to Russia. Working in Saint-Petersburg, Zebo got to know that she was HIV-positive. Even though it was difficult for her, she found strength to go back to her home country with her children and get the proper treatment. Now she has a job and feels support from her three kids and AFEW-Tajikistan.

Shrinking space of civil society in the EECA region was also an important topic during many events of the Conference. AFEW’s director of programme Janine Wildschut led an active discussion on the strategies for coping with shrinking space for the civil society and shared AFEW’s techniques in the EECA networking zone in the Global Village.

“In EECA, we have observed a diminishing space for civil society organisations, perhaps best exampled by the ‘Foreign Agent Law’ in the Russian Federation. The shrinking civil society space threatens the effectiveness of the response to HIV and other public health issues, particularly as it pertains to the health and rights of key populations,” says Janine Wildschut.

The report on the coping strategies amongst resilient harm reduction organisations and community networks in the context of shrinking space for civil society in Eastern Europe and Central Asia can be read and downloaded here. Martine de Schutter Scholarship Fund event was organised during the AIDS 2018 to bring together the donors of the Fund and the scholars and give them an opportunity to meet the family of Martine. The Fund established by AFEW raised 130.000 EUR to cover the additional scholarships of the EECA applicants to come to Amsterdam for the AIDS Conference. It was an emotional gathering, with gratitude expresses by the scholars for an opportunity to come to the conference – for many for the first time in their lives. AFEW’s executive director Anke van Dam said that AFEW has an intention to continue fundraising for the Fund to further support EECA delegates for international scientific meetings and conferences.

Martine de Schutter was a strong Dutch advocate for human rights and had a passion to Eastern Europe and Central Asia. Her last trip was to AIDS 2014 Conference in Melbourne on the MH17 plane that was shot down and crashed.

EECA ministers showed their political will Within AIDS 2018, AFEW took part in Ministers and civil society dialogue meeting, organized by the World Health Organization Regional Office for Europe and UNAIDS, in cooperation with the Government of the Netherlands. Ministers of health and senior policy-makers from 10 countries in EECA were introduced to the civil society organisations’ representatives during the meeting. The participants exchanged their experiences and the results of their national AIDS responses with a view to adapting them and scaling them up across the region. They discussed the Fast-Track priorities for achieving the 90–90–90 targets. EECA government representatives reaffirmed their political commitment to scale up national HIV responses during a ministerial policy dialogue on HIV, which was held on the eve of the International AIDS Conference in Amsterdam, Netherlands.

Hermitage dinner as the climax of Culture Initiative events AFEW established International Cultural Initiative – a platform to complement AFEW’s consolidated track record in advocacy, education and outreach campaigns on matters of public health in the EECA region. The artistic work put forward by our six artists-in-residence, who came from EECA countries, was showcased at a variety of cultural institutions of the city of Amsterdam between May and July 2018. During the AIDS Conference, art-pieces were accessible to the general public in the Global Village.

The special Dialogue Dinner was the climax of AFEW’s cultural activities, taking place in the Hermitage Amsterdam Museum. We hosted an evening with dialogues about the EECA region, while savouring food and art from the region. 60 invitees representing policy makers, researchers, NGOs, foundations and international development specialists focusing on public health in the EECA region attended the dinner.

Chasing the virus together AFEW Network members were actively participating in the EECA Campaign “Chase the virus not people!” that was launched at AIDS 2018 by the region’s community networks. EECA regional networks joined forces in response to the current situation to urge the world to overcome discrimination and the stigmatisation of key populations. AFEW International joined the campaign and was also one of its organisers.

“It was very important for us to join this campaign because this is the first campaign in which all regional networks united their efforts to draw attention to the problems of key population groups. AFEW is also against the backdrop of the catastrophic situation with the HIV/AIDS epidemic in EECA,” says Daria Alexeeva, EECA at AIDS2018 project manager at AFEW International. “Being actively present in six countries of the region, we realize how important it is to unite our efforts with other networks to achieve the common goal.” 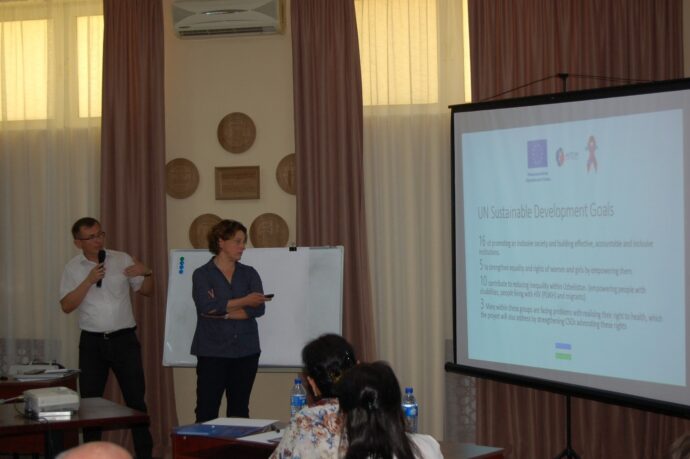