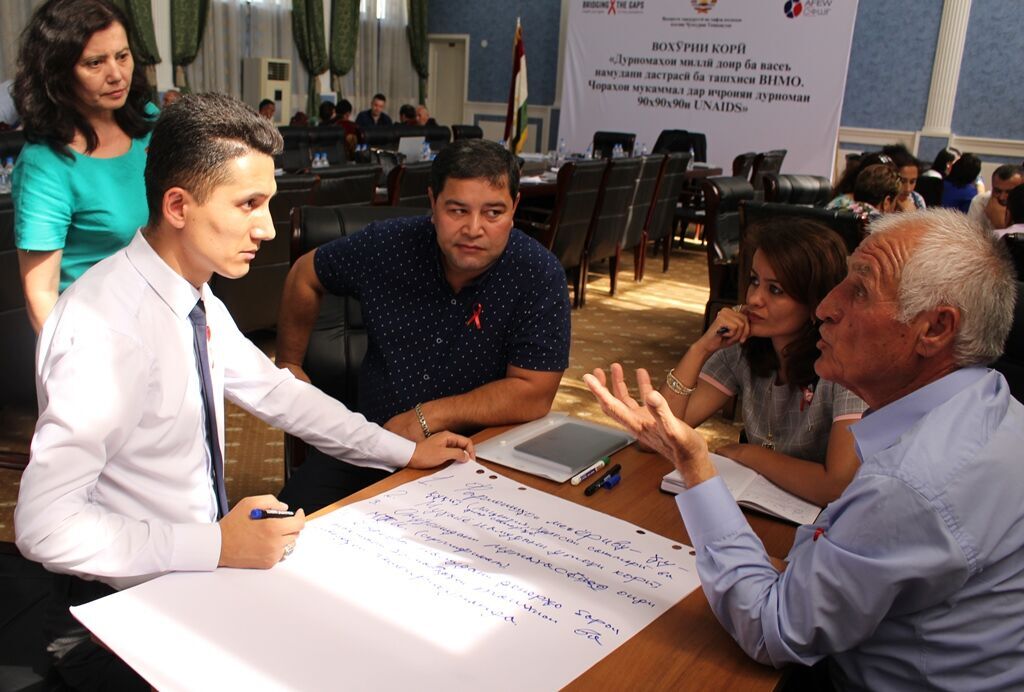 90-90-90 Strategy was Discussed in Tajikistan ivil sector representatives together with the heads of the AIDS prevention and control centers in Tajikistan worked out practical steps for the implementation of the voluntary counselling and testing (VCT) service in the activities of public organizations. They talked about this during the meeting National strategies of expanding access to HIV testing. Response measures for the implementation of UNAIDS strategy 90-90-90. Republican public organization AFEW Tajikistan shared its successes on September 6, talking about the work of its HIV voluntary counselling and rapid testing point in Qurghonteppa.

“Thanks to this meeting, now I have a vision of how to organize a VCT office in a public organization, where to start, what documents should be prepared and what services should be consulted beforehand. This meeting with its practical exercises, in my opinion, united us with the partners. This can influence the personal growth of each participant,” the director of Tajikistan Network of Women Living with HIV in Dushanbe Tahmina Haydarova is saying. During the meeting, 50 representatives of state, public and international organizations from Gorno-Badakhshan Autonomous Region, Khatlon and Sughd Region, and the city of Dushanbe talked about the interaction of state and public organizations in providing integrated and coordinated services to key populations in the field of HIV, TB/HIV. They also got acquainted with the main provisions of new UNAIDS strategy 90-90-90, key activities of the National Program to Counteract the HIV/AIDS Epidemic in the Republic of Tajikistan for 2017-2020, and AFEW Tajikistan experience in integrating services and introducing VCT.

The meeting National strategies of expanding access to HIV testing. Response measures for the implementation of UNAIDS strategy 90x90x90 was held within Bridging the Gaps: Health and Rights for Key Populations project that is funded by the Dutch Ministry of Foreign Affairs.